The magnificent structure of Constantinople is the Basilica Cistern, located in the old city (Sultanahmet) next to Hagia Sophia. 1500 years old cistern, built by the Byzantine Emperor Justinian, is called the "Palace" among the people because of the hundreds of marble pillars rising out of the water. It was also called Basilica because there was a Basilica where the cistern is located.

Rent one of our chauffeur-driven cars that will make your daily Istanbul visits easy, and have the chance to explore multiple historical places on the same day. Book a private transfer from your hotel to the Basilica Cistern using the button below. Now

The cistern is a giant underground structure covering a rectangular area of approximately 10.000 m2. It can hold approximately 100,000 tons of water. Each is 9 meters high, with a total of 336 columns, and 52 stone staircase structures. Every 4.80 meters from each other, forms 12 rows of 28 columns. Most of the columns have been collected from older buildings and carved from various types of marble, consisting of one piece and some of them consist of two pieces.

The headings shape of these columns has different features from each other.  Most of the columns are cylindrical except for a few that are angular or grooved.  Since some columns in the middle of the cistern were exposed to the danger of breaking during construction in 1955-1960, each of them was supported by thick concrete layers and therefore lost its old characteristics.  The ceiling space of the Basilica was transferred to the columns by means of arches. Almost 5-meter-thick brick walls and the brick-tiled floor of the cistern were plastered with a thick layer of mortar and made watertight.

What İs Basilica Cistern Used For?

The cistern, which was used to irrigate the gardens of Topkapı Palace during the Ottoman period, was used to meet the water needs of the residents of the great palace and the region during the Byzantine period.

After the Ottomans conquered the city in 1453, they quickly established their own water facilities and did not use stagnant drinking water. Basilica Cistern, while the Dutch traveler P. Gyllius was wandering around Hagia Sophia in the middle of the 16th century, learned that the people of the house drew water, or even drew water, with buckets they brought down from large well-like holes on the ground floors of the houses here. It was almost rediscovered and introduced to the world. P. Gyllius entered the cistern with a torch in his hand, from the walled courtyard of a wooden structure above the cistern, through the stone steps leading to the underground. Since the cistern was filled with water, P. Gyllius determined the columns by taking measurements under difficult conditions. Gyllius, who published what he saw in his travel book, influenced many travelers

The cistern, which was repaired twice during the Ottoman period, was first renovated by Architect Mehmet Ağa during the reign of Sultan Ahmet III (1723). The second renovation is Sultan II. It was built during the reign of Abdülhamid (1876-1909). Recently (1987), after it was cleaned by the Istanbul Municipality, a sightseeing platform was established and opened to visitors as a museum. It was again undergone major cleaning and maintenance by the municipality of Istanbul in 1994. As of 2022, renovation and improvement works are carried out. The Basilica Cistern, which has been under restoration for a long time, was reopened to visitors on July 22, 2022.

Is the Basilica Cistern Opened?

The Basilica Cistern, which has been under restoration for more than a year, was opened to visitors on Friday, July 22, 2022.

Medusa Head sculptures, which are among the masterpieces of sculpture art in the Roman Period, were used as pedestals under two columns in one corner of the cistern. It is not known where the Medusa heads were taken from and brought here. Researchers also think that it may have been brought only to be used as a column base during the construction of the cistern. Despite this, there are many Head of Medusa legends.

Medusa is one of the three Gorgons, female monsters of the underground world, whose gaze turns people to stone in Greek mythology. These three Gorgona, snake-headed Medusa, have always created a terrible hypnotic effect. Today, structures such as paintings and sculptures continue to be used to protect people, things, and places, and it is therefore estimated that the head of Medusa will be placed in the cistern. In Turkey, it is believed that the evil eye bead protects from bad looks and bad luck.

According to another legend, Medusa was a girl who boasted black eyes, long hair, and a magnificent body. Medusa fell in love with Perseus, son of Zeus. Medusa also had a rival; The goddess Athena also loved Perseus so much that she was jealous, and Athena cursed Medusa out of jealousy and turned her hair into ironing snakes. Now, everyone that the cursed Medusa looked at turned into stone. Later, Perseus cut off Medusa's head and used his powers to defeat many of his enemies. (Film-Medusa)

The Head of Medusa was embroidered on the sword hilts by the Byzantines and placed upside down on the column bases so that the ministers would not be stoned. The sculptor, who made the sculpture in the Basilica cistern, processed Medusa in three different positions according to the reflection angles of the light. 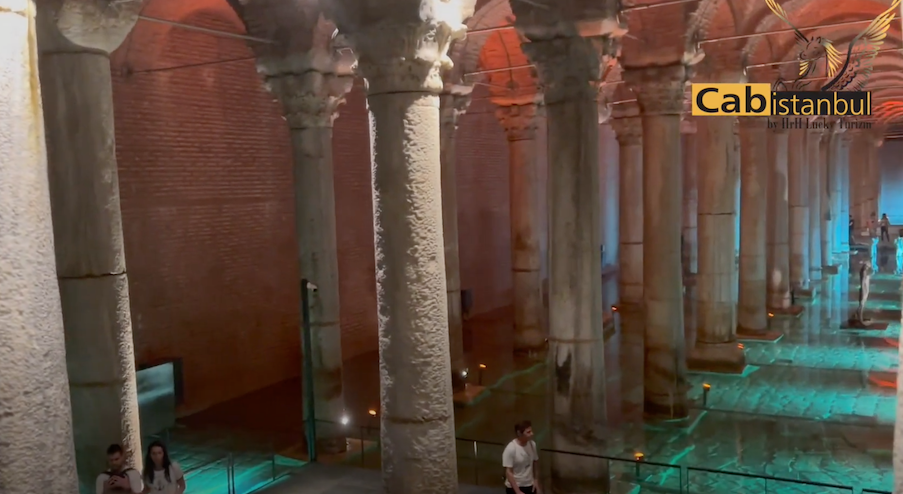