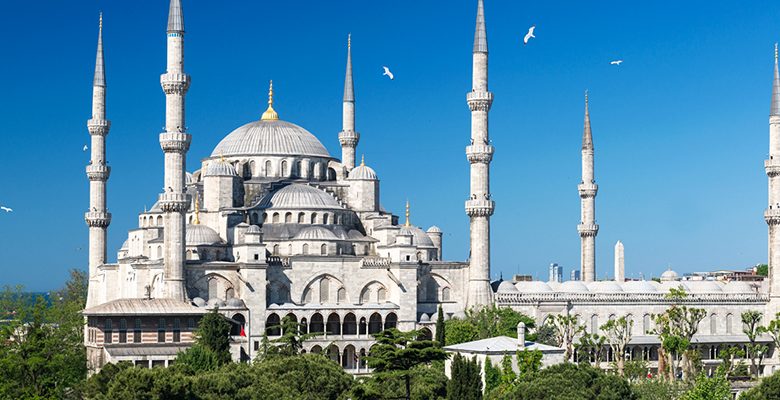 Sultan Ahmed Mosque ( Blue Mosque) has the design of the combination of two centuries of development. It has one main dome, six minarets and eight secondary domes. The Sultanahmed Mosque effected by the design of the Christian style of neighbour church Hagia Sophia with traditional Islamic architecture. Blue Mosque considered the last great mosque of the classical period. Architect Sedefkar Mehmed Agha, synthesized the ideas of masterArchitecter Sinan, aimed at magnitude, power and splendour. 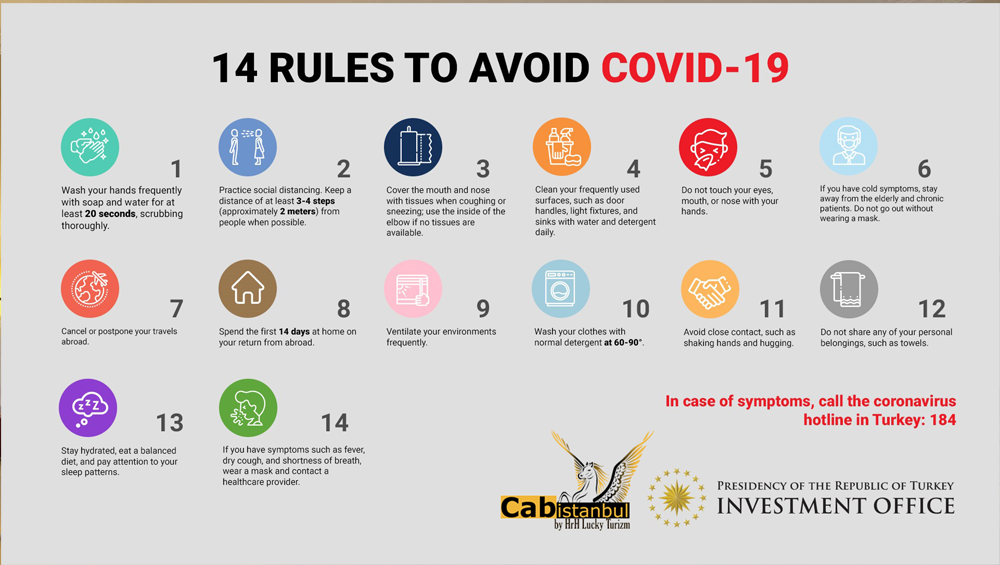 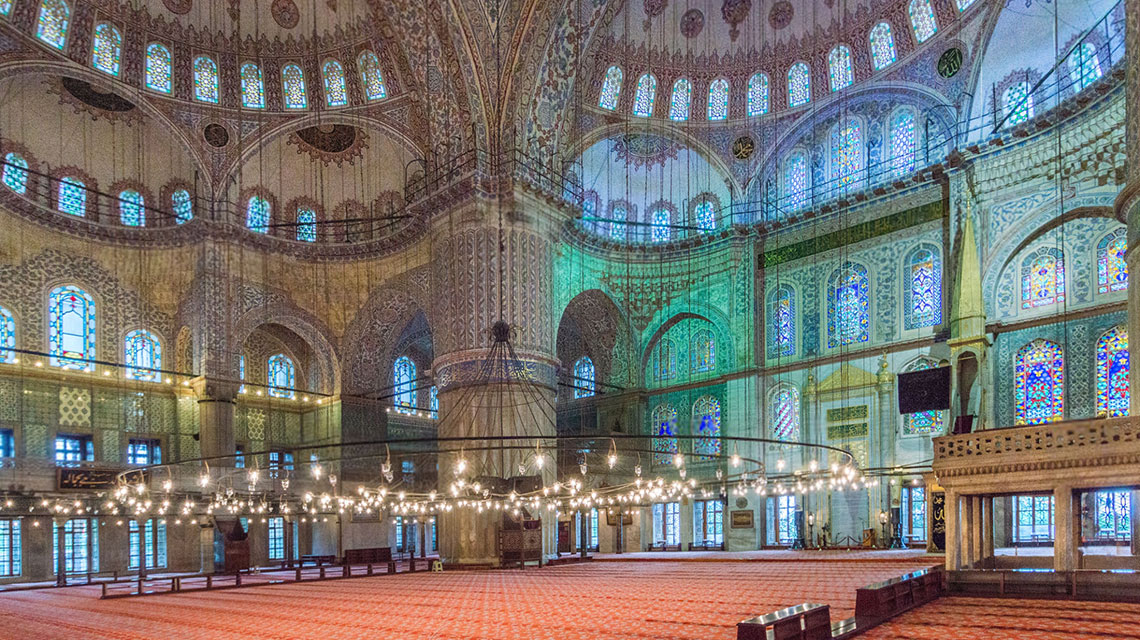 Sultanahmet Mosque in Istanbul is considered one of the most important mosques in the Turkey. It is also known as the Blue Mosque because its interior walls are adorned with decorated blue Nicaea tiles. The distinctive ceramics were brought from the city of Nicaea . The lower floors and all the inner columns of the mosque were designed by more than fifty different design of daisies. Covered with more than 20,000 ceramics from the traditional Anatolian style. The designs in the exhibition grounds are flowers, fruit and cypress. The ceramics were made by the best artisans in Nicaea . 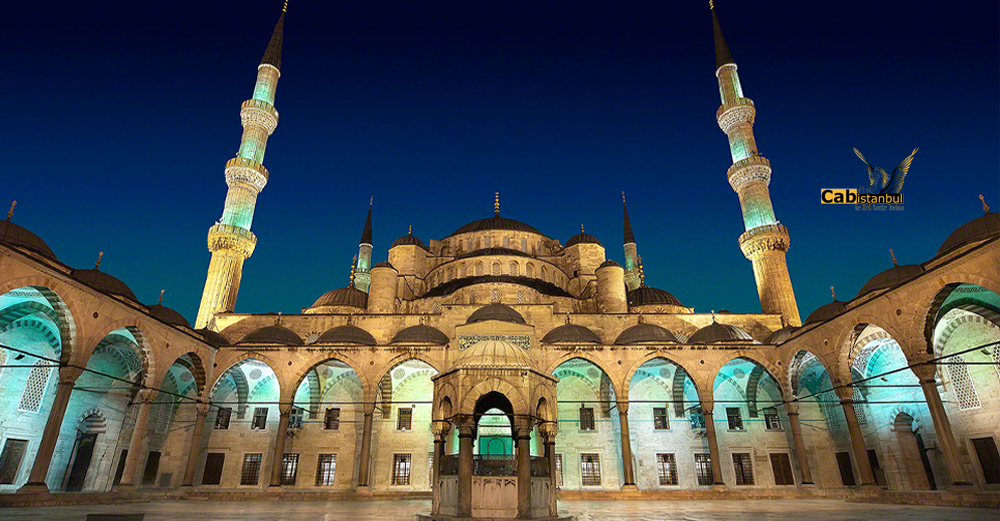 The Blue paint dominates the upper floors of the interior. There are more than 200 windows with complex designs, today they are receiving natural light supported by chandeliers. Chandeliers have an Ostrich egg in front of the mosque, blocking the spider webs by expelling the spiders. The decorations include the verses of the Qur'an, which are considered to be the best calligraphy masters of Sayyid Kasim Gubari's time. 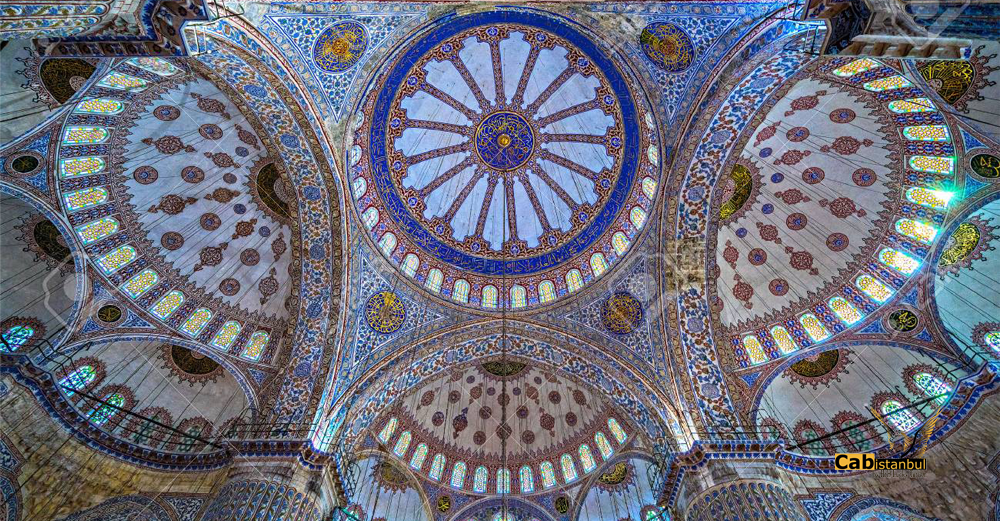 The floors are covered with carpets donated by the loyalists . Very large windows make outstanding impression. The floor is decorated with the best carpets. Each corner has five windows, some of which are shade. Each semi-dome has 14 windows and the central dome 28 decorated windows were the gift of the specially made Venetian Signoria sultan. Many of these coloured windows have been replaced with modern versions that no longer artistic valued. 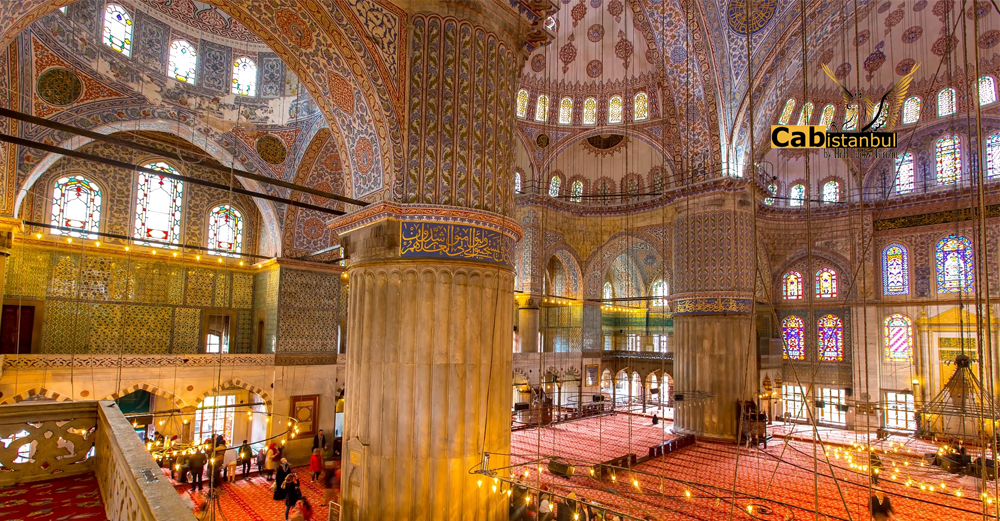 The most important element in the mosque is a Mihrab made of carved marble, with a stalactite niche and a panel with double inscriptions. Surrounded by many windows. Adjacent walls are covered with ceramic tiles. To the right of the mihrab, there is a richly decorated pulpit, where the imam sermons stand at noon prayer or on holy days. 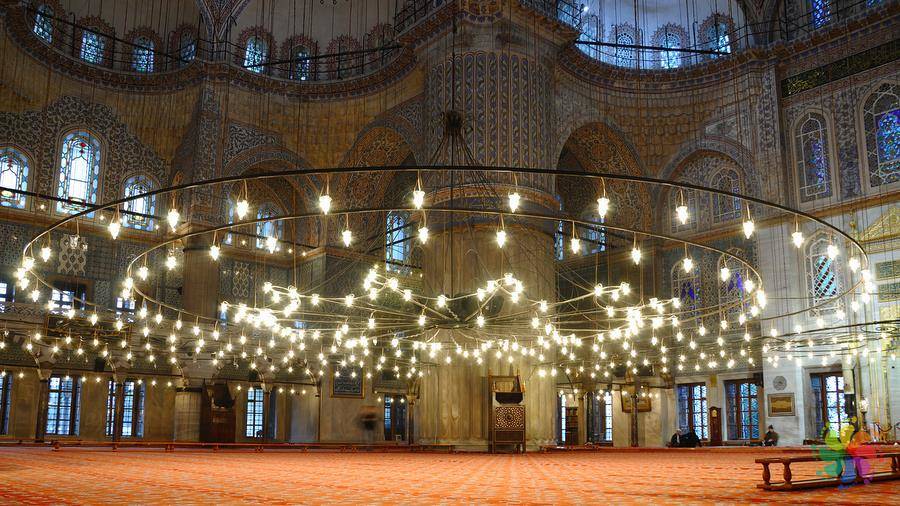 Sultan domes are located in the southeast corner. It consists of a platform, a porch and two small rooms. Provides access to the royal passage in the upper gallery of the mosque south-east. These rooms became the center of the Grand Vizier during the suppression of the rebel Janissary Corps in 1826. The royal coat of arms was supported by ten marble columns. It has its own mihrab adorned with old jade rose and gilded ornaments, and has a face quran in a gilded pattern. 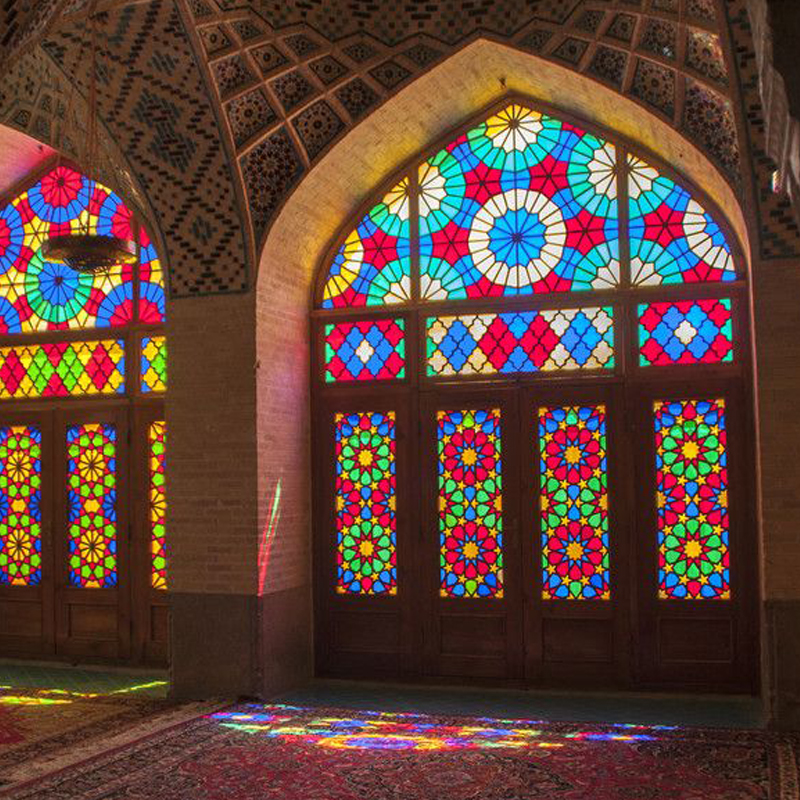 The marvellous boards on the walls are written with the names of the caliphs and verses from the Qur'an. They were originally built in the 17th century by calligrapher Seyyid Kasim Gubari in Diyarbakir, but were repeatedly restored. Many lamps in the mosque were once covered with gold and precious stones. Glass bowls include ostrich eggs and crystal balls. All these decorations have been removed to the museums.

We pleased to offer transportation and Touristic travel programs in any region of Turkey. Cabistanbul is the right choice for your transportation needs, 7/24 services. Car rental with driver. Affordable services like Airport transfer to any place in Turkey. Take advantage of other  services such as Limousine services, Cappadocia trip, Istanbul Tours and Bursa Tours, Yalova trip, Sapanca Tours, Meet and Greet Service, Bosphorus Cruise Tour, Private İstanbul tour, Car Rental contact us now...