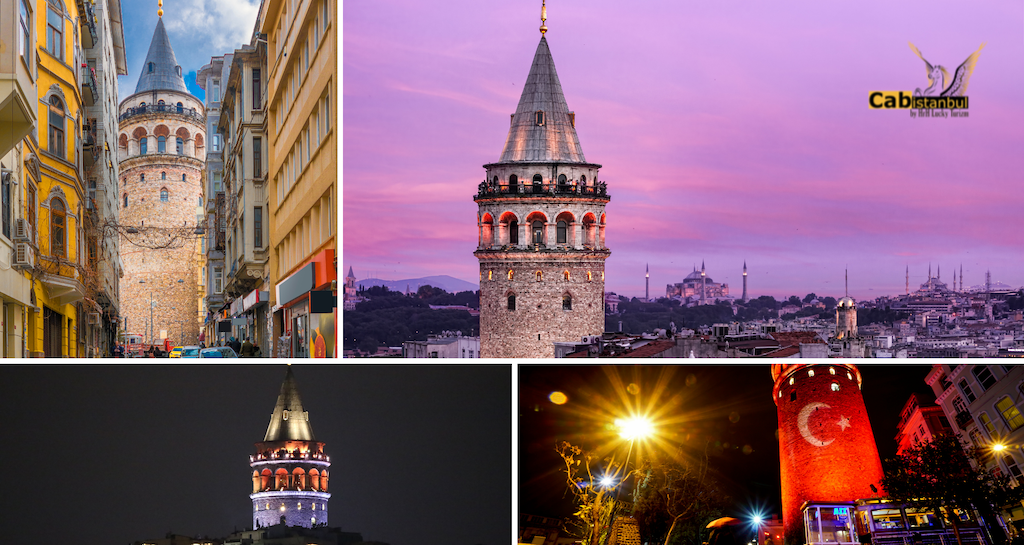 Galata Tower is the visual symbol of Istanbul. Witnessing different times from Byzantine to Ottoman, this tower is an important part of the city's memory. Let's get to know the Galata Tower closely.

Before going into details about the Galata tower, the best way to visit important places in Istanbul where you can watch the city from above is to rent a car with a driver who speaks English. Click below for a transfer from Istanbul airport or Saw airport to your boutique hotel in Galata

Galata Tower is one of the first things that come to mind when talking about the historical buildings of Istanbul. The building, which has been observing the city for hundreds of years with its majestic appearance, and various stories told about it, gives its guests the privilege of both learning about Istanbul's past and watching the unique city view.

located to the north of the Golden Horn, with the name "Pera" (it keeps its name as a district adjacent to the Galata region), and this colony's dominance was over time, with the permissions given by the Byzantines. had expanded. The Galata tower was built as a part of the fortifications made in the region between 1335-1349 by increasing the Genoese domination area. In its current state, the Galata Tower Museum takes its name from the Galata district in Istanbul/Beyoğlu district. Built as a watchtower within the Galata Walls, the tower is now used as an exhibition space and a museum. It is one of the symbolic structures of both Beyoğlu (Taksim) and Istanbul. There is nothing good like walking from Taksim square to Istiklal street because at the end of the walk you will reach the tower. Add this place to your list of places to visit. 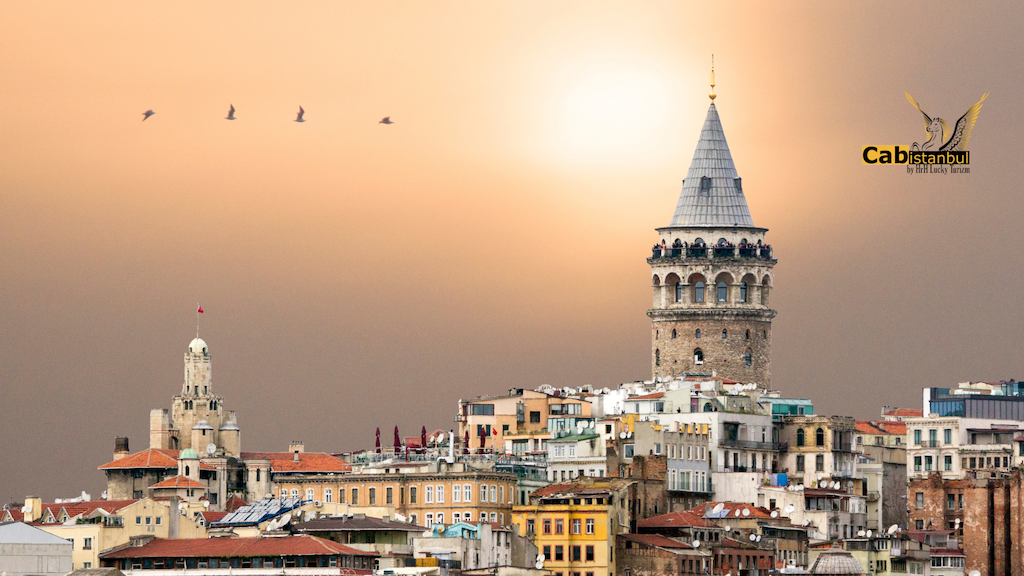 History Of The Galata Tower

The first Tower was built in 528 by the Byzantine Emperor Anastasius Oilosuz. The first building was a little far from where it is today. The purpose of the Galata Tower was to guide the sailors as a lighthouse, and it was first made of wood. Despite this, he managed to survive for almost seven centuries and fulfill his duty properly.

It is known that there was a wooden tower in place of the existing tower, and the Latin invasion of the tower that started in 1204 brought the end of the first tower. The Galata Tower was severely damaged as a result of the fire that broke out during the looting that the army established for the Crusade started on the way back. In 1348, the Genoese again built the tower with the wall technique. Due to its location, it was believed that the presence of the Galata Tower would greatly facilitate the defense of the city. After the Ottomans captured Istanbul in 1453, the tower was given tasks other than defense and surveillance.

Galata Tower was converted into a place where Christian shipyard prisoners were used as labor in the 16th century. In the same period, an observatory was established by Takiyuddin with the permission of the Sultan. However, this attempt was short-lived due to the point of view of the positive sciences at the time. Galata Tower has been used for fire observation and informing the public since the 17th century. One of the fires, which was converted into the Janissary Corps in the 18th century and broke out continuously in Istanbul at that time, started in this tower at midnight and was once again severely damaged. The works that gave the tower its current appearance, whose roof fell due to the storm, were carried out between 1965-1967

Galata Tower Depictions At Genoese Period 1348-1509. When its construction was completed, the tower itself was the most magnificent tower of the walls of which it was a part. In the Genoese period, there was a cross on the top of the tower. According to the traces on the tower, it is mentioned that there is a wooden bridge that can be removed when necessary, that provided transportation between the inner city and the outside of the ditches, and that does not exist today.

The tower is depicted in different ways in different versions of the Liber İnsularum Archipelagi by Cristoforo Buondelmonti in the archives. The tower on the map of Constantinople in the 1420s and 1430s; is depicted higher than the other towers with its conical roof, arch series, cantilever upper floor, and cylindrical structure. On the map on the copy of the University and State Library of Düsseldorf, dated between 1485-1490, the Genoese flag is located on the top of the tower.

When the region came under Ottoman rule in 1453, the tower was subject to destruction which caused it to shorten by about 7.5 m, according to anonymous Ottoman sources cited by Ahmed Vefik Pasha. After the sultan's edict against Pera, this destruction was stopped and the tower was raised again and the cross on the top was replaced with the Ottoman flag.

According to Roman traditions, it was believed that when couples who truly loved each other went to the Galata Tower together for the first time, they would definitely get married.

There were two young people who were in love with each other living in this period. Both of them are burning with love and their eyes see no one but each other. But couples could not persuade parents to marry. The only way left is to go to the Galata Tower together. Until that time, neither the towers, which were called "unable to meet", nor the tower that brought the lovers together. At most, they said, going to Galata would save us.

But the young man had a situation that was gnawing at his heart and that his loved one did not know. The boy has been to this tower before, with another girl. At that time, the young man took a naive girl to the Galata Tower to deceive him, but when he met the one he loved, he closed his heart to other girls, but he also has a great conscience. He thought for nights but could not open his heart to the young girl. In the end, he could not stand the insistence of the young girl, and one night they secretly went to the Galata Tower. When the magnificent view of Istanbul unfolded before them on a magical night, the young girl who wished to meet with all her heart believed that her despair would be resolved, but the eyes of the young man were always shadowy and sad.

At that very moment, the sky was pierced, the dark air was illuminated with lightning, and rain that had never been seen before began. The lovers were surprised, they did not know what to do, they ran away from the tower. The young man felt obliged to tell the truth to the girl and their paths parted, never to meet again. After that day, it was believed that if one of the lovers who climbed the tower had gone to the Galata Tower with someone else, this talisman would be broken.

As the “Christos Walls”, three of the Galata Walls are on the land side and one is on the seaside. Entrances and exits to Galata Region; In the past, it was built in two separate parts. The fact that nine of these gates are in the direction of the sea indicates that Galata was a port city. The Galata Walls, which are said to be 14 kilometers in total from start to finish; It is said to have a height of 10 meters to 12 meters. It is known that the son remnants of these walls were washed in 1864.

Genoese sailors, who came to Istanbul for the first time, are told that the white seagull guides them in the dark. As a manifestation of their faith, the Genoese, who identify the seagull with  Jesus, catch, cook and eat it after following it to its nest. They build the Galata Tower in his memory in the place where his home is located.

They say you will marry the person you go to Galata Tower with. This legend dates from Roman times. There is a strong belief that a man and a girl who go to the Galata Tower together will marry and be happy. Of course, one of the parties must have climbed the tower before, because then the talisman is broken. It also means that couples who will go to the tower together are a strong obstacle to not getting married. Galata Tower radiates the energy of living together for a lifetime and being happy in a moment. If you go to Galata Tower as a couple, keep it in mind.

The entrance fee to the Galata Tower for 2022 is Museum Card 30 TL. Cash 100 TL Individuals between the ages of 0-4 can enter the tower free of charge.

The historical building is excluded from the scope of the Muzekart.

Galata Tower opens to visitors every morning at 09:00. Closing time is determined as 20.30. Of course, if you have made a reservation for the restaurant, you can enjoy the Galata Tower until 22:00.

Long queues may form in front of the Galata Tower on public holidays, weekends, and religious holidays. Therefore, more flexible time planning is required on these dates. 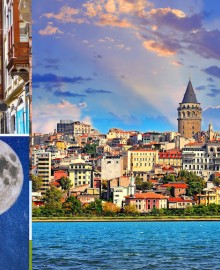 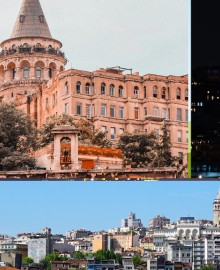 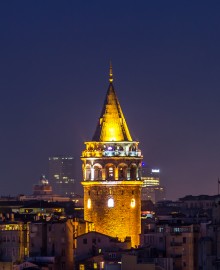 The Byzantines named the tower Megalos Pyrgos, that is, the Great Bastion. The Genoese preferred to use the name Christian Turris (Christ Tower) when talking about the building. The origin of its current name is thought to come from the Greek word "Gala", which means "milk".

Height of Galata Tower: The building has a height of 69.90 meters with its roof. Untreated rubble was used in the construction of the 9-story tower. With a wall thickness of 3.75 meters, Galata was found to weigh approximately 10 thousand tons as a result of calculations. The inner diameter of the building is 8.95 meters and the outer diameter is 16.45 meters.

-The 1st floor is arranged as a museum store, and souvenirs related to Istanbul are sold.

-The 2nd floor is arranged as a simulation area with a giant screen, where Hezârfen Ahmed Çelebi's flight from Galata Tower to Üsküdar is shown as an animation. In addition, on this floor, there are works and information about the period when the tower was used as an observatory.

-The third floor is used as a temporary exhibition hall

-The 4th floor is arranged as a museum. The Golden Horn chain, which has been preserved as a symbol of the victory of the Ottoman Empire and the identity of the city, is an important work on display.

-The 5th floor is a floor arranged as a museum where five showcases and works from the Neolithic, Roman, Byzantine, and Ottoman periods are exhibited.

-On the 7th floor, there is a model of Istanbul supported by electronic systems, including models of important historical buildings. In addition to this model, there are also 5 viewing binoculars on this floor.

-İnside the elevator cabins, with a specially designed system, each of which has 8 screens, the view that a person would see when he ascended the Galata Tower in an elevator with a glass cabin in the 16th century was given the feeling of rising upwards.

-The elevator goes up to the 6th floor. The 8th floor, which is the top floor of the tower, is reached by stairs. The panoramic viewing balcony on the 8th floor is the most interesting part of the tower