The first tower in the Yedikule fortress was built by  II. Theodosius, In the year 413 of the Eastern Roman Empire, and his son, who came to the throne after Theodosius, had four high observation towers built. After the conquest of the city by the Ottomans three additional towers were built by Fatih Sultan Mehmet, the fortress has in total of seven towers, and with the completion of the towers in 1457, Yedikule gains the appearance of today's inner castle.

If you need to fit your time into a visit to Istanbul in a limited time, let us greet you at the airport by writing your name on a board, and do the best airport transfer to take you to your destination as soon as possible. The most efficient way to use your time in Istanbul may be to rent a car with a driver from Cab Istanbul, make a reservation using the buttons below to not miss this valuable opportunity.

The area we call Yedikule today was called "Heptaburgon" in the Byzantine Period. The foundations of the Yedikule Fortress were laid for the first time during the Eastern Roman Empire Period. II. Theodosius  (408-450) had the city walls built, most of which are present today. With the increasing attacks in the Byzantine Period, the walls formed a three-stage defense architecture, with an added level and the second level with a ditch in front of it. Although the aim was to prevent attacks, the boundaries of the region we call Yedikule were also determined by the construction of this city wall.

Yedikule's history, full of legendary events, dates back to the Byzantine Period. After all, the reason why Yedikule is so famous and interesting is the mystery it contains and its legends, which have been passed down through generations and are the subject of stories by exaggerating. The reason for many of the legends and rumors spreading in the city is due to the Marble Tower, which has not reached our day in its original form. This four-story tower built right next to the Theodosius Walls, was used as an execution tower and a prison during the Byzantine Period.

The treasures of the Empires in Yedikule, the rooms covered with precious metals still preserve their mystery. Unfortunately, it is not possible to find traces of the coastal palace around Yedikule, which may have been destroyed in the fires and earthquakes in Istanbul. The coastal palace, which is said to have been built according to rumors, seems to have taken its place in the mysterious page of history by closing the legends in its glazed rooms.

With the conquest of Istanbul by the Ottoman Empire, people brought from outside were settled especially on the coastline stretching from the shores of the Golden Horn to Topkapı and Yedikule. In the same period, that is, after the conquest of Istanbul in 1458, the two pylons of the Golden Gate, which was the triumphal arch used by the Byzantine Emperors to enter the city, and the two fortification towers in the same row, a three-towered wall was added to these four bastions, and Yedikule Fortress was built by Fatih Sultan Mehmet as an inner castle.

The wealth and valuables belonging to the Turkish rulers are kept here. In one of the towers in Yedikule Fortress, there was gold bullion and money, in the other old and valuable goods, official documents, and in another, the booty brought by Yavuz Sultan Selim from Iran. Between 1458 and 1789, the state treasury, called the Treasury-i Hümayun, was located here. It was moved to the palace during Sultan Murad.

The dungeon, which is located in the middle of the pylon in the southern part of Yedikule is also known as the "Bloody Well", is a place that has witnessed many events. It is known that Çandarlı Halil Pasha and his sons were imprisoned in these towers for the first time after the conquest. After the complete Yedikule dungeon construction, the last emperor of the Trabzon Greek Empire, David Komnenos, joined the Ottoman lands in 1461 and his sons were executed in the Yedikule fortress (dungeon) in 1463.

The most famous prisoner in the Yedikule dungeons is undoubtedly Sultan II. Osman (Young Osman), was deposed in 1622. II. Osman was dethroned and II. After Mustafa was put in power, after the enthronement ceremony was held in Topkapı Palace, Grand Vizier Davut Pasha and Janissary Agha Derviş Ağa and his company chiefs, II. They put Osman in a market cart and took him to the Yedikule dungeon. At midnight, Davut Pasha went to Yedikule with his unit, a few rebels, and II. Although Osman tried to resist, he was killed in the fortress. 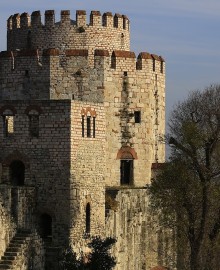 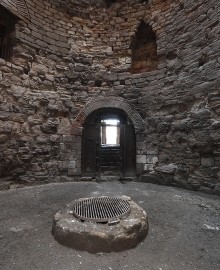 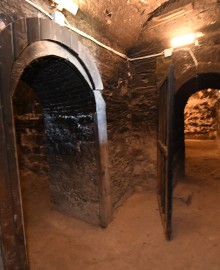 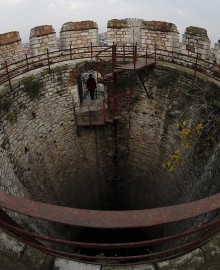 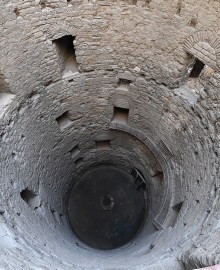 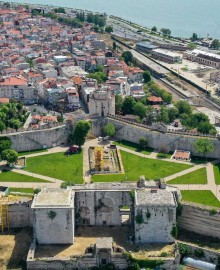 -Yedikule Fortress, which has been the subject of legends such as the mummy and the curse of the captive pagan in the Ottoman Period, still preserves this legendary atmosphere over the centuries.

-In 1831, Topkapı Palace lions were brought to Yedikule Fortress, and it was used as a zoo during the reign of Sultan Abdülmecid (1851).

-In Yedikule Fortress, which has an important place in the city in terms of meeting social needs, the Girls' Art House operated between 1871 and 1875.

The structure of Yedikule has survived till the present day; primary school, girls' art school, cemetery, and III. The Ahmed Tower was destroyed, the remains of the fountain and the minaret of the old Fatih Mosque. It is thought that the neighborhood, which is said to have existed in the fortress, was destroyed as a result of an Istanbul fire, and the idea is put forward that the houses inside were also burned in this fire. Considering that the orchards in the courtyard of the fort have not survived, it is seen that the neighborhood culture within the walls has completely disappeared.

Yedikule Fortress, which was connected to the Istanbul Hisarlar Museum directorate from 1968 to 2004, started to be used as a place where various concerts and events were held. 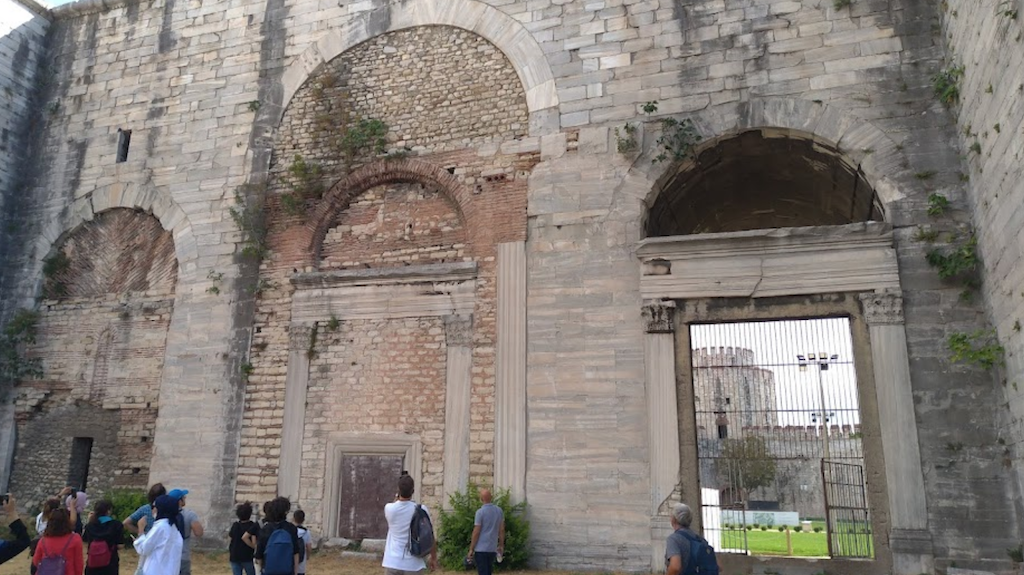 Yedikule Golden Gate, which once adorned the walls with its splendor in the city, was built by the Eastern Roman Emperor III. Theodosius.

After the Yedikule Fortress, the Emperor had a wall built in order to strengthen the defense of the coastal side of the city, and by having a monumental gate built here, the walls were almost crowned. This gate, which was built in 413, is a triumphal arch.

The Golden Gate, also known as the Gilded Gate and the magnificent ornament of the Theodosian Walls, undertook the task of welcoming the emperors who returned to the city victorious for centuries. Ceremonies were held at this gate for the emperors who returned with victories from the wars they participated in, and the entrance to the city was made through this gate, accompanied by processions.

The main ceremonial gate, the Golden Gate, was called “Porta Aurea” in the Eastern Roman Period and was called “Yedikule Gate” in the Ottoman Period. 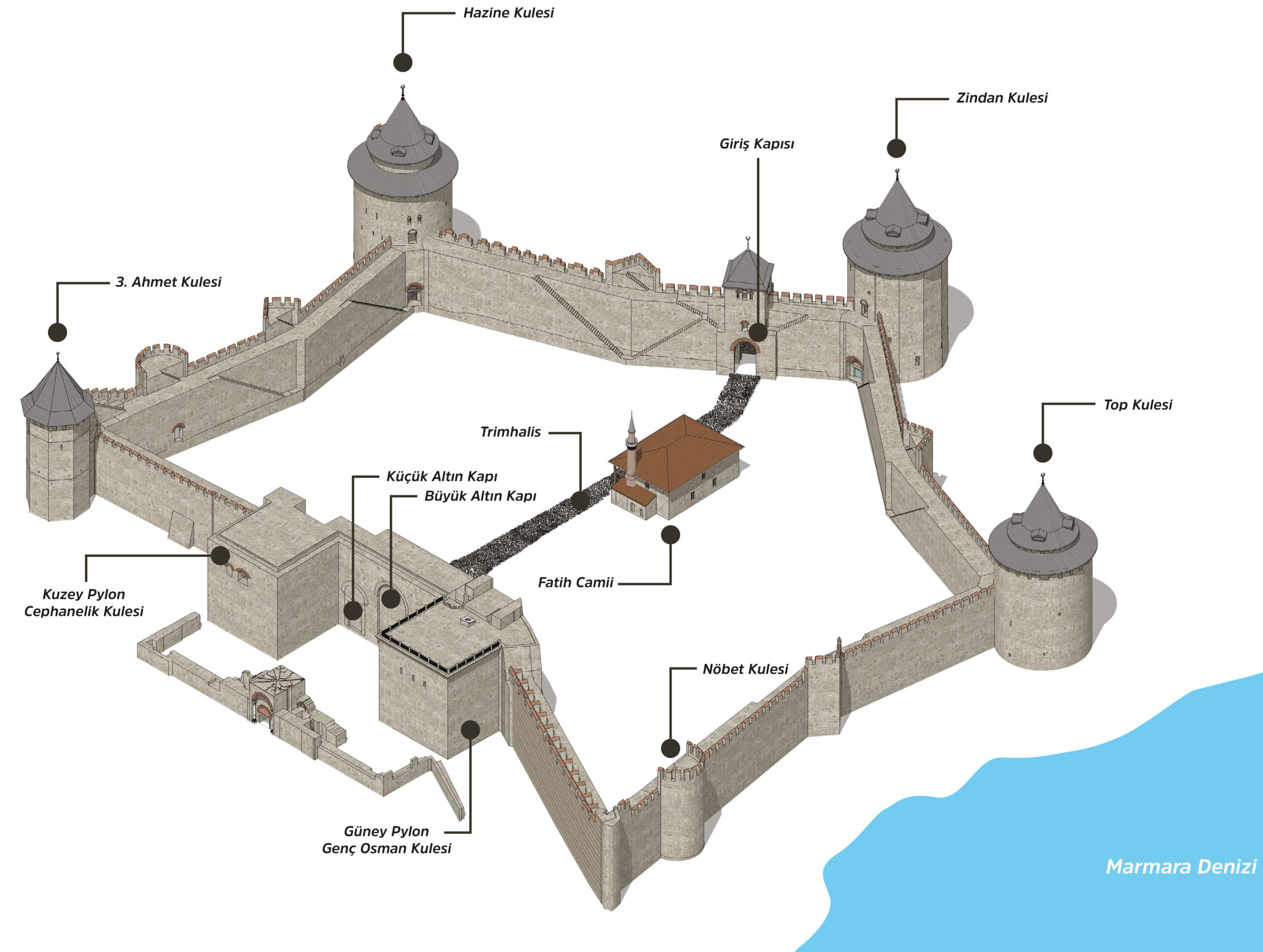 - Guided cultural tours have started in Yedikule Fortress, one of the oldest open-air museums in the world and restored by Fatih Municipality.

- Registration is required for the tours, which take place 6 days a week except for Monday, in different sessions and with the participation of 20 people.

- Each visitor can only register once for the tour, where there is no age restriction, and the visitors will provide their own transportation to the venue.

- It is necessary to be ready in the area 20 minutes before the start time of the registered session.