With the decision published by the Council of State, it annulled the decision in 1934 to transform Hagia Sophia from a mosque into a museum. President Recep Tayyip Erdogan's signing of the Presidential Decree stipulating the transfer of Hagia Sophia

to the Presidency of Religious Affairs and opening it to worship, we witnessed the historic day

when Hagia Sophia will be opened for Muslims with the Friday prayer on 24 July 2020.

Since it was built as a monastery for Orthodox Christians, it is also considered sacred for people of this faith. The decision, which received reactions from the world, was not a matter of debate as to what effect it would have on tourism. On the other hand, there will be no change in the acceptance of visitors of Hagia Sophia, except for the entrance rules to the Mosque. Since mosque visits are not covered by the museum, it is probable that free entrance will increase the density. It is known to the public with the opinion of experts how the density will affect the Hagia Sophia of sixteen hundred years. 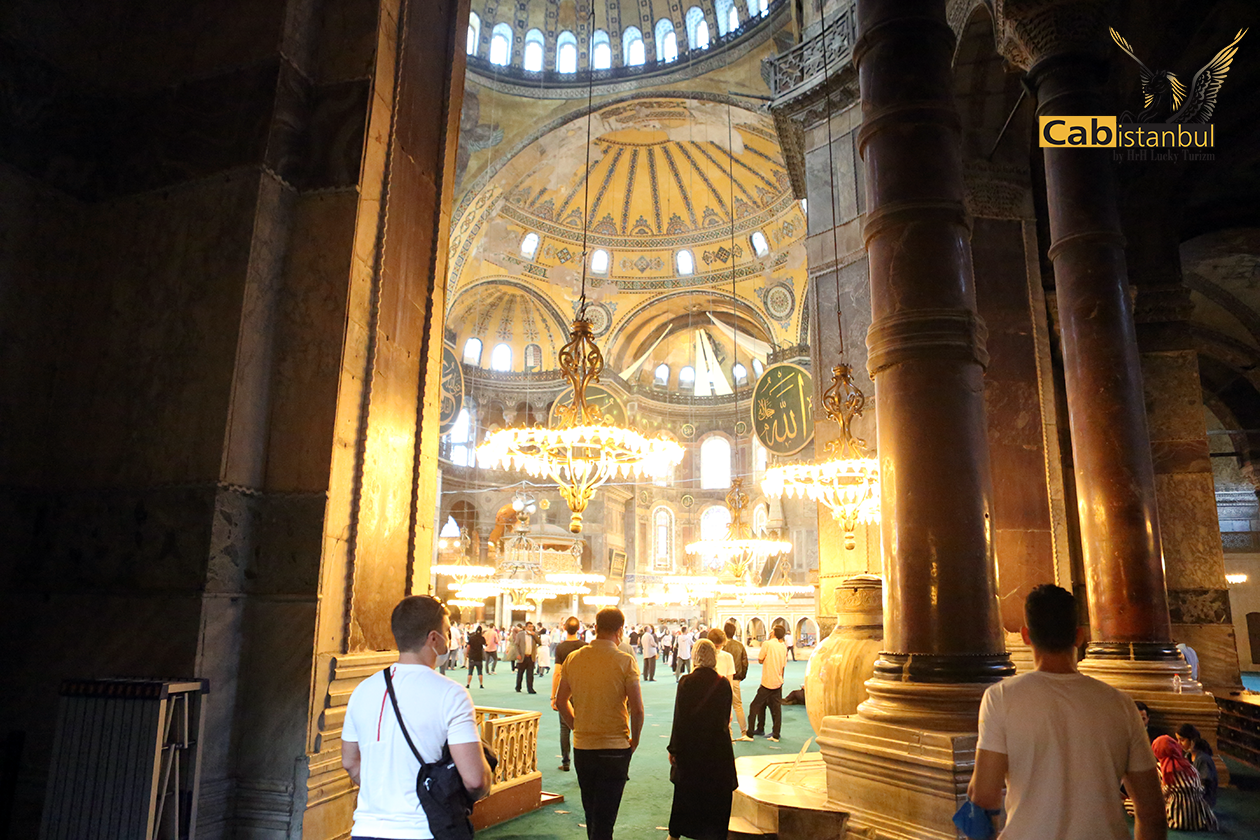 After Sultan Mehmet the Conqueror captured Constantinople in 1453 and determined the building as a mosque, it became an important mosque for Muslims. While it served as a mosque until it was converted into a museum in 1934, it was turned back into a mosque on July 24, 2020. The most visited museum among all museums is Hagia Sophia; It is one of the world's leading monuments in the history of art and architecture. Hagia Sophia is considered “the eighth wonder of the world” which was built by

East Roman Philon in the 6th century. Hagia Sophia is the third structure, done in a different architectural style, even though it is still the same place as the former two. Hagia Sophia-Mosque-Museum-Church has seen numerous transformations throughout history from church to mosque to museum

The Hagia Sophia structure was built in the Emperor Justinian era (527-565) by Isidoros (Miletus) and Anthemius (Tralles) during the construction works, 100 architects along with two chief architects. Its construction started on 23 February 532 and was completed in a short period of 5 years and 10 months and was opened for worship with a big ceremony on 27 December 537.

After Hagia Sophia is converted to a mosque, tourists will be able to visit the Hagia Sophia free of charge. It will be open to visits outside of prayer hours, like the Blue Mosque

At Hagia Sophia Mosque no light will be used to cover the paintings and depictions. With the screening system during the prayer, the paintings, depictions, and mosaics will be closed and reopened after the prayer. While it is aimed not to damage the historical texture and architecture of the building. The floor of the Hagia Sophia is covered with nice carpets.

The biggest Orthodox church, which was 916 years old, first was converted into a mosque by Fatih Sultan Mehmet after the conquest of Istanbul in 1453 and used as a mosque for 482  the Council of Ministers, Hagia Sophia opened its doors as a museum.

Why is Hagia Sophia important?

Hagia Sophia is part of the World Heritage. For almost a millennium after its construction, it was the largest cathedral in Christianity. It served as the center of religious, political, and artistic

life for the Byzantine world and provided us with many useful scientific insights into the period.

The Hagia Sophia is located in the Fatih district of Istanbul and in Old City Square (Sultanahmet). To the museum; It is possible to reach by tram, taxi and private transfer.

Note: Today, Hagia Sophia Mosque is programmed to be open 24/7 as a mosque, not a museum. It is open to worship and visit 24 hours a day.

Is There an Entry Fee?

Since it is now a mosque, visits are free for all.

You can share your travels and experiences with us by commenting on our article.

On the night of the day when the first wooden structure of Hagia Sophia was destroyed by fire when Justinian went to bed that night, a white-dressed man in peace calls out to him. He wants him to build a great temple, one of a kind in the world, to give fame to the Christianity of which he is a member, and to spend his property for his own religion. When Justinian wakes up from his slumber, he tries to separate his ideas and dreams for a while and decides to spend his treasures on this great temple, to build a temple larger than that of the pagans. Justinian, who gathered all his viziers and state officials that morning, after telling about this dream he had at night, tells that each of his ancestors left a magnificent monastery heirloom in Constantinople and that he now wants to have a great temple built for this city and spend his treasure for this building as long as he lives.

Take advantage of Cab Istanbul's Rental Car And Driver Service now for the Hagia Sophia Mosque and more, the most important works of the world's architectural history that have survived until today. If you are staying in a hotel near Hagia Sophia, which has a unique value, you can use our private transfer services with peace of mind. This building, which is the symbol of Istanbul with its splendor, architecture, historical and cultural value, is a place you should visit wherever you are in the world.