Kayakapi Premium Caves Hotel, the most magnificent boutique hotel in Cappadocia/Turkey, is also the most attractive hotel in the world. İt’s the supported by World Heritage Center, UNESCO a cave hotel that deserves more than 5 stars.

While you are making your spiritual choice, let us give you a 15% discount on your Istanbul-Cappadocia transportation needs. If you are staying at Kayakapı Premium Caves Hotel, you should definitely rent a car with a driver from Cab Istanbul for your activities such as open-air museums, underground cities, hot air balloon tours, horseback tours, classic car tours

Click the buttons below for online Istanbul- Cappadocia transfer offers and hire a minibus offers.

Car With Driver For İstanbul Trip

Ürgüp, Kayakapı Neighborhood, is one of the first historical settlements of the city. Kayakapı Residents In 1984, most of the population settled in the "Disaster Houses" neighborhood in Cappadocia, which was newly established next to the Damsa Stream. As a result of these developments, the Kayakapı region gained a mysterious texture that settled in the memory of the city with its semi-ruined structures and natural elements left to its own devices, and on the other hand, it entered the process of disappearing gradually.

It was added to the UNESCO World Heritage List in 1985.  It is located at the borders of Goreme National Park, and it’s known as a Muslim region, but the more influential figure is the Eset Bey Mansion, known as the House of St. Yohannes.  This house is one of the usual stops of the Fener Greek Patriarch's annual visit to Cappadocia.

With the analyzes made within the scope of the Kayakapı Project, 421 traditional structures in the urban texture, made with rock carving and stacked stone techniques and organically integrated with each other, were identified. In addition, churches, mosques, baths, fountains, residences, etc. Some of these are already registered, and some of them are proposed to be registered as a result of planning studies. There are 20 cultural and natural properties that need to be protected, consisting of monumental and civil structures, pigeon valley, and fairy chimneys.

Ürgüp, the most important center of Cappadocia, the caves and structures that were used as houses for hundreds of years were transformed into the standard hotel room and luxury suites with a pool, with premium caves Cappadocia returned to its glory days

You can be one of the special guests of the ancient Kayakapı in Urgup / Cappadocia, which contains cave houses, and cave churches from the 10th century, and watch the story of how an ordeal turned into pleasure.

If you would like to add a Cappadocia to your Turkey tour and if you are like most travelers starting from Istanbul, you can give a reward to your subconscious feelings from your ancestors by staying in a cave room.

Private properties in Kayakapı, which was declared an urban site, were expropriated as a priority, and investor Kayakapı Premium Caves – Cappadocia was included in this project partnership by the Ürgüp Municipality with the "restore - operate - transfer" mode

It will be possible to express the Cave Hotel Project as the tourism-oriented location of the Kayakapı region, with the priority of protecting the urban structures of the neighborhood and the natural environment. With this project, accommodation facilities will be created within the historical housing texture and the traditions of the past will be revived in accordance with their originality. In this way, the local history and cultural accumulation will be used for tourism purposes in the neighborhood with modern touches.

İn the project, while making a tourism investment at international standards, where comfort and luxury meet on common grounds, it was aimed to preserve the cultural and natural values ​​that the Kayakapı neighborhood has in its historical texture and to bring it to light again

Which Airport Should Come For Those Coming To Cappadocia?

There are two airports close to Cappadocia: Cappadocia Airport (NAV) and Kayseri Airport (ASR). In terms of preference, we recommend that you buy the ticket that suits your time and budget.

No, unfortunately, a free airport transfer service is not available. You can buy an airport private transfer or shuttle service from Cab Istanbul.

What Are The Places To Visit Near Kayakapı Premium Caves – Cappadocia?

Kayakapı region is located in Ürgüp, within the borders of "Göreme National Park and the Rocky Parts of Cappadocia", and was added to the UNESCO World Heritage List in 1985. Historical and natural attractions such as Göreme Open Air Museum, Uçhisar Castle, and Love Valley are about a 10-15 minute drive away. You can find out the distance from the hotel to the places to visit in Cappadocia from the table below.

Where Are Cappadocia And Urgup?

Cappadocia, most of which is located within the provincial borders of Nevşehir, is a historical region in Central Anatolia. Ürgüp is a district of Nevşehir Province. Ürgüp, which has gained a reputation for being well-adapted to tourism, has become one of the most preferred destinations by tourists thanks to its proximity to the rock churches in Göreme and its vibrant nightlife.

Is Urgup A Nice Place?

Urgup is a settlement and therefore it is known as the heart of Cappadocia. You can also witness the daily lives of the locals by walking through the historical streets of Ürgüp, which is 10-15 minutes away from most attractions. 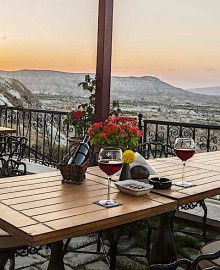 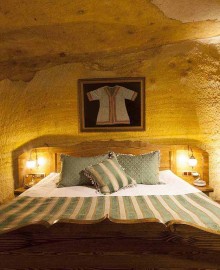 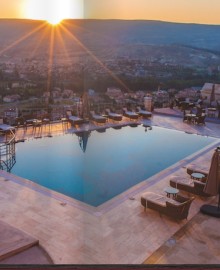 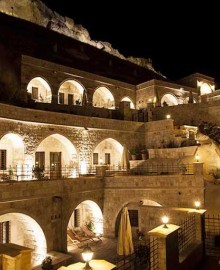 Kayakapi Premium Caves suite rooms continue to carry hundreds of mysterious stories in their texture. In addition to the luxury and comfort they provide with the Turkish bath, cave pool, and natural thermal insulation, Cave Suites also act as the guardians of heritage from history by transforming hundreds of abandoned houses into wonderful suites.

Don't you think it's time to see the natural wonders?

Are you ready to embark on the most exciting journey of your life?

Be a witness to a day you will spend in Cappadocia, which has hosted countless civilizations for millions of years, the beauties of the cave suites, the miracles of nature, and the Kayakapı cave suites that turn unique dreams into works of art.

Kayakapı cave room, which reflects the historical and cultural values of the region in the best way, prioritizes guest satisfaction.

How Many Rooms Does Kayakapi Premium Cave Hotel Consist Of?

Are All Rooms Of Kayakapı Premium Cave Hotel Caves?

Except for one room (121 – Saadet Erkuş Evi) half, all rooms and suites in Kayakapı are caves.

No, unfortunately, no pets are allowed.

Do Kayakapi Premium Caves Rooms Have Their Own Bathroom?

Yes, all rooms have their own bathrooms. In addition, most of our rooms also have a hammam.

The natural feature of cave rooms is that they keep the room warm in the winter and cool in the summer. Therefore, there is no need for air conditioning in the rooms. However, all rooms have air conditioning.

Does Kayakapi Premium Caves Hotel Have A Swimming Pool?

Yes, the hotel has an outdoor swimming pool that all guests can use free of charge. In addition, rooms 201, 202, and 203 have their own outdoor pool. If you are looking for a personal pool experience, he can recommend 4 Pools & Cave suites with a private indoor pool inside the rock.


Things To Do İn Cappadocia