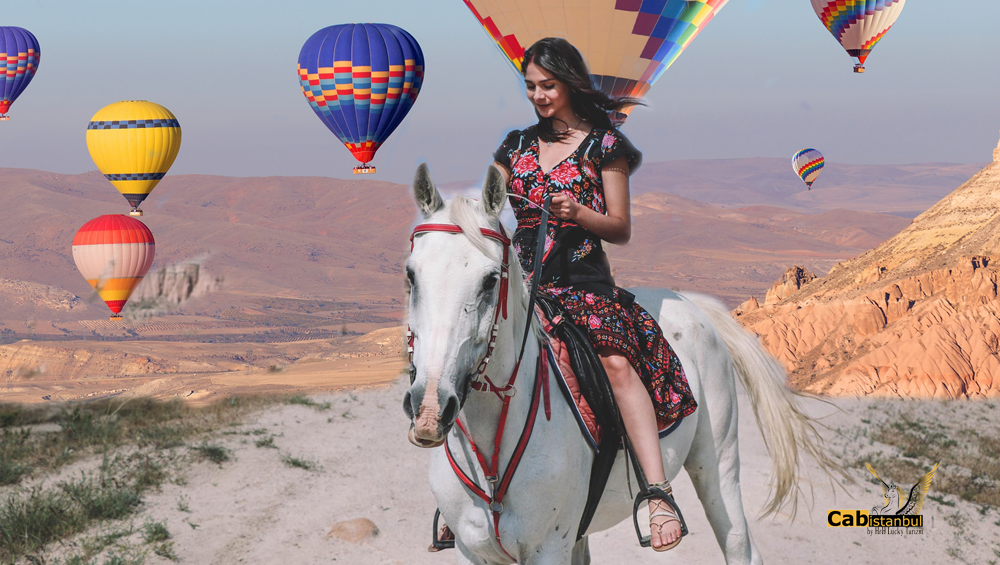 Cappadocia is a place where natural beauties are blended with a miraculous view The interesting structure of the region offers you more beauty underground than on the ground. Cappadocia is such an interesting settlement that even today new underground cities are discovered and it does not end with solving secrets. From the unique view of its balloons, the magnificent and distinctive stance of the fairy chimneys to the interesting textures of underground cities, this is a true fairy tale city. While exploring

Cappadocia requires tiring and staying in the dust on some challenging tracks, Cab İstanbul private Cappadocia tour makes it easy, hire a car with driver to professional English speaking driver will take you all attraction place at the easy way, ​every frame you see will be worth

After these structures, which are like the summary of the region, you can reach the lives in the deep pits of Ihlara Valley, the giant fairy chimneys of Pasabag (Pashabakh), and the bitter story of the Three Beauties. If you want to examine an example of mansions, you should not go without stopping by the famous Asmalı Konak.

What to See in Goreme Urgup

Derinkuyu and Kaymaklı underground cities will be ready to welcome you with their underground treasures as well as their aboveground beauties. Guvercinlik (pigeon house) valley will make you feel the historical texture and allow you to enter a mystical atmosphere. If you want to scan the region with a bird's eye view and dominate the views, you should not return without a balloon tour.

Interesting Facts About The Fairy Chimneys

The fairy chimneys, which are called Peribacaları in the Turkish language, are the magnificent ruins of the Cappadocia region, which has been home to many civilizations since the Bronze Age, and whose effects are seen as many caves, churches, monasteries, and retreats. Underground cities were built in tuffy rocks in the lower part of the Urgup formation, known as the Poplar tuffs in the early Christian period. Some of these underground structures are at least 1500 years old. Therefore, while many historians are constantly investigating the impact of these underground structures on civilization, engineers continue to study the engineering properties of these extraordinary materials for construction material purposes.

They are places with high thermal insulation of underground structures. It is known that the tuffs found in Urgup are superior to all other food storage systems in terms of food storage and long-term durability.

Where Are The Fairy Chimneys in Turkey?

A large part of the fairy chimneys, located in the Central Anatolia Region, Nevsehir in Cappadocia district, 7 kilometers from the city center. There are fairy chimneys in many parts of Nevsehir, but the most common and oldest fairy chimneys are available in Cappadocia. The Cappadocia region has spread to the provinces of Kırsehir, Nigde, Aksaray, and Kayseri, especially Nevsehir.

When we say Nevşehir is Cappadocia is the first thing that comes to mind without a doubt. The city is visited by 2 million tourists annually, it is one of Turkey's most popular tourist attractions.

How Were Fairy Chimneys Formed?

Nevsehir is an attractive city with its world-famous Fairy Chimneys and dozens of sightseeing spots in the region of Cappadocia. Fairy chimneys according to the estimation and geological information, the region of Cappadocia and its fairy chimneys are thought to have formed from lava and ashes which were sprayed by Erciyes, Hasandagı, and Gulludag 60 million years ago.

Today, the region we call Cappadocia covers Aksaray, Nevsehir, Nigde, Kırşehir and Kayseri provinces. Among these borders, Avanos, Urgup, Goreme, Uchisar, and Ihlara surroundings are known as the "Rocky Cappadocia Region ''. In addition, Christians fleeing the persecution of Rome, began to take refuge in the inaccessible borders of Cappadocia.

Finding the easiest carving of soft volcanic tuff, expanding the natural caves and connecting them together, building shelter places where these people desperately seek peace and security, they created underground cities, houses, churches, and monasteries which are among the most visited places today.

It is a region preferred by couples, where you can observe the fairy chimneys panoramically and take pictures inside the heart-shaped seat. I think there are also ATV tours. Try the freshly squeezed pomegranate juice.

When Cappadocia is mentioned, the first thing that comes to mind after fairy chimneys is the balloon tour. Hot air balloons are indispensable for this warm atmosphere. When you come to the region, if you want to see everywhere, you should definitely take a hot air balloon tour. Especially if you don't have much time and you are tired quickly. In this way, you can see almost all tourist places within two hours and have an unforgettable experience. Balloon tours are usually arranged by your travel agency or hotelthe day before.

The average fee for a balloon tour is 150 Euro to 200 Euros. The payment is possible with cash and credit card. Then the next morning, before sunrise, the balloon company's vehicle picks you up from your hotel. Then you go to the area where the balloons are and watch how all the balloons fire up and inflate gradually. When the balloons are ready, you are taken to the baskets and the journey begins after the warnings of the balloon captain. Of course, the weather conditions must be suitable for the balloon to fly.

In order for the flight to go smoothly, you must ask for a flight certificate. Your guide captain also introduces you to the area and tells you how high you are, and you can watch the whole area wherever you are in the basket as it flies by turning the balloon slightly. You will complete your journey of approximately one hour by passing both through and over valleys, fairy chimneys and every place to be seen. Then the alcohol-free champagne is usually popped and the landing is celebrated. Afterward, your flight certificates or medals prepared in your name will be presented and you will be taken back to your hotel with the service. Cappadocia, which attracts attention with cave hotels and balloon tours, welcomes many guests thanks to cave hotels and balloon tours. In addition, thanks to the large number of churches in the region that attract a lot of tourists.

It can be assumed that the underground cities in Cappadocia, which are established on an area of ​​approximately 25 thousand km2, have more than one purpose. It can be assumed that these cities were built as defensive and comfortable residential areas. It is understood that it is preferred as a living space thanks to the construction of and natural heat investment. The underground cities, which were planned in the shape of a labyrinth, became a defense (hide) area against the invaders.

The abundance of rock called tuff in the region suggests that the first cave houses were built primarily for shelter and later expanded by the Hittites for defensive purposes by connecting them to secret passages. Against the Arabs who flocked to the region in the 7th century, the inhabitants of the region built more organized underground cities in Kaymaklı, Derinkuyu, Mazı, Ozluce, Ozkonak, Tatlarin, Kuru Yukarıgol, and Gokcetoprak.