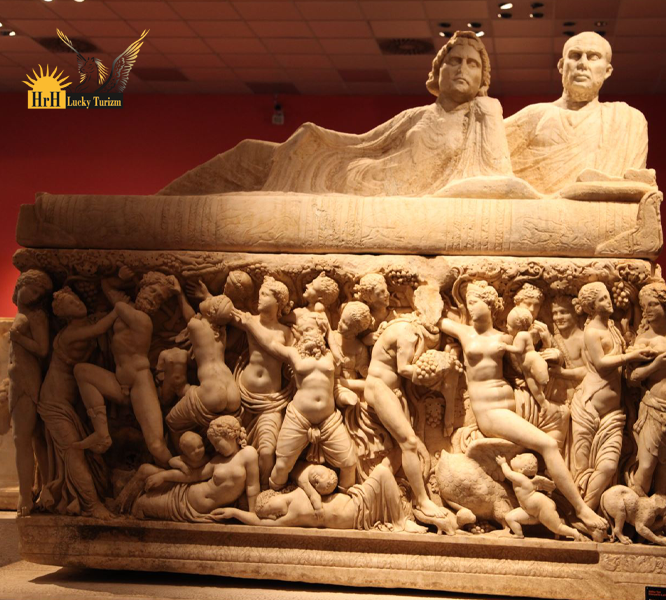 Antalya Archaeological Museum was established in 1922 by the teacher Mr.Suleyman Fikri Erten to protect the artifacts saved from the pillage of the occupation forces who came to the region after the First World War. The museum, which was first located in Alaaddin Mosque in Kaleici (Antalya old city center) and later in the Yivli (grooved) Mosque, was moved to its current building in 1972. The Antalya Museum today consists of 14 exhibition halls in an area of ​​30 thousand square meters, open-air galleries where sculptures and various works are exhibited, and a garden. An important part of Lycia, Pamphylia, and Pisidia, three ancient cultural regions within the borders of the Antalya Region, one of the corners of the Anatolian lands with the richest past of human history, constitute the responsibility area of ​​the Antalya Museum. Scientists from many countries carry out scientific excavations every year in Antalya, which is a unique open-air museum and an international excavation center with its archaeological richness. Numerous rescue excavations and archaeological landscaping work in the region are carried out by the Antalya Museum.

Antalya Archaeological Museum is the greatest History Museum and it's one of the popular Antalya Regional Museum. Most of the works in the museum were obtained from the excavations in the nearby area, all ethnographic works were collected by museum experts in the Antalya region. In the halls, works that reflect the thousands of years of history of Antalya lands, which started with the first man and lasted uninterruptedly until today, are exhibited according to their chronological and local subjects.

The museum can be considered among the most important museums in the world, especially with the sculptures of the Roman Period found in Perge and the interesting and unique finds unearthed from the museum salvage excavations in recent years. The museum was awarded the European Council Museum of the Year award in 1988.

Children's Section: In this hall, toys, and games played by children ages ago are exhibited. In addition, a typical Anatolian city bazaar, many of which are now destroyed, can be seen.

Natural History and Prehistory Hall: In this hall, fossils that witnessed the formation of the world and the first finds of human history are included. In this hall, the use of goods produced by human beings, idols, statuettes belonging to their beliefs, and a cube tomb that reflects one of the oldest burial traditions of Anatolia, are also included in this hall.

Ceramic Works Hall: With the progress of civilization, it is possible to see the aesthetic and technological development in terracotta artifacts chronologically from the Geometric Period (BC.1100) to the Byzantine Period (AD.1100).

Emperors Hall: In this hall, the emperors and empresses of the Roman Period and the important political figures of the period, dating to the 2nd century AD and found in Perge, are exhibited in this hall.

Hall of the Gods: It is possible to see the magnificent combination of sculpture and mythology in this hall. There are statues of gods and goddesses, such as Zeus, the king of gods, Aphrodite, the goddess of love and beauty, and Apollo, the god of sunlight, mentioned in Greek mythology.

Mosaic Hall: The "Philosophers Mosaic" found in the Agora of Seleukeia, a Pamphylian city, is one of the most impressive works of this hall. In addition to the mosaics, a sculpture group from the Perge sculpture workshop and the lower half of the Heracles Statue, the upper half of which belongs to the same workshop and is in the USA, can also be seen in this hall.

Perge West Street and F5 Fountain Hall: In this hall, the Athena statue came out of West Street, the Aphrodite statue came out of the square in front of the Hellenistic Period Towers, and a total of 13 sculptures were unearthed from the F5 Nymphaeum pool located in the west corner of the northern bath are exhibited.

Perge Theater Hall: Seventeen monumental sculptures, friezes, and some architectural pieces obtained from the stage building as a result of archaeological excavations in Perge Theater are exhibited in this hall.

Hall of Sarcophagi: Most of the sarcophagi exhibited in this hall were found in the excavations made in the Perge necropolis. In this hall, the Pamphylia-type sarcophagi with Medallion, Column, and Garland, and fragments of the Garland Tomb and Heracles Tomb can also be seen. 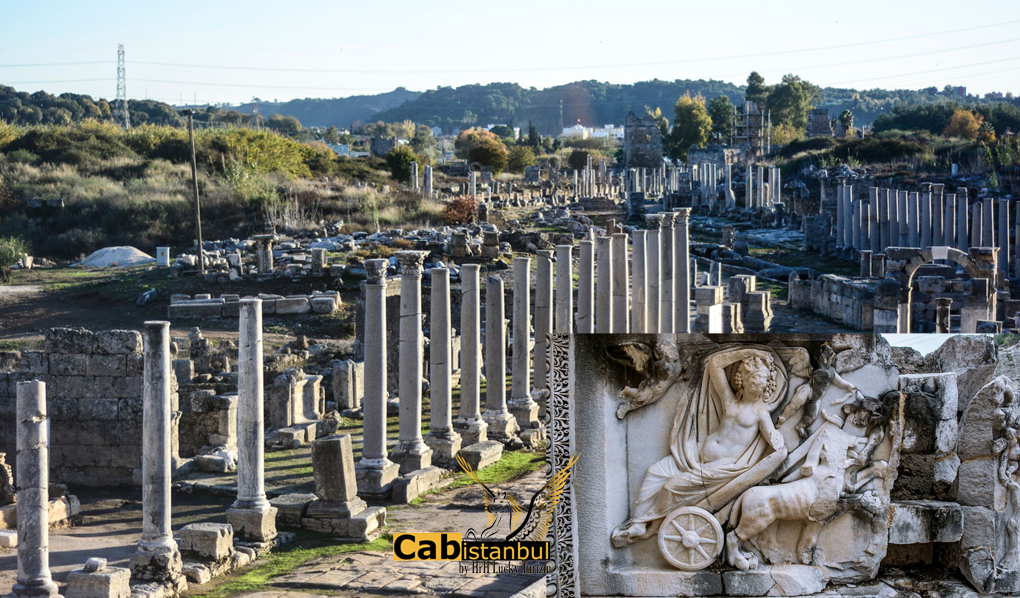 Hall of Sarcophagi: Most of the sarcophagi exhibited in this hall were found in the excavations made in the Perge necropolis. In this hall, the Pamphylia-type sarcophagi with Medallion, Column, and Garland, and fragments of the Garland Tomb and Heracles Tomb can also be seen.

Dead Cult Hall: Examples of burial traditions are exhibited on the ground floor of the museum annex building. An engraved burial reconstruction uncovered in the ancient city of Patara; The magnificent Dioniziac sarcophagus found in Perge; A caryatid, pediment, and friezes belonging to the Heroon of Limyra; Statues and inscriptions belonging to the temple built by the Limyrans for the Ptolemaic family can be seen in this hall.

Coins, Small Artifacts, and Icons Hall: In the coin display section of this hall, coins from the Pamphylia, Pisidia, and Lycia regions, Elmalı Coins and Principalities Period, Anatolian Seljuk, and Ottoman coins are exhibited.

Ethnography Hall: The ethnography section of the Antalya Museum consists of two large halls and a passage that connects these halls. In the ethnography halls, works and animations containing Turkish-Islamic Works and the most beautiful cultural objects of our recent history can be seen.

Sinevizyon Hall: It is the hall where information about the city of Antalya and its archaeological sites is given, where the Antalya Museum Directorate is explained and various visuals can be watched. 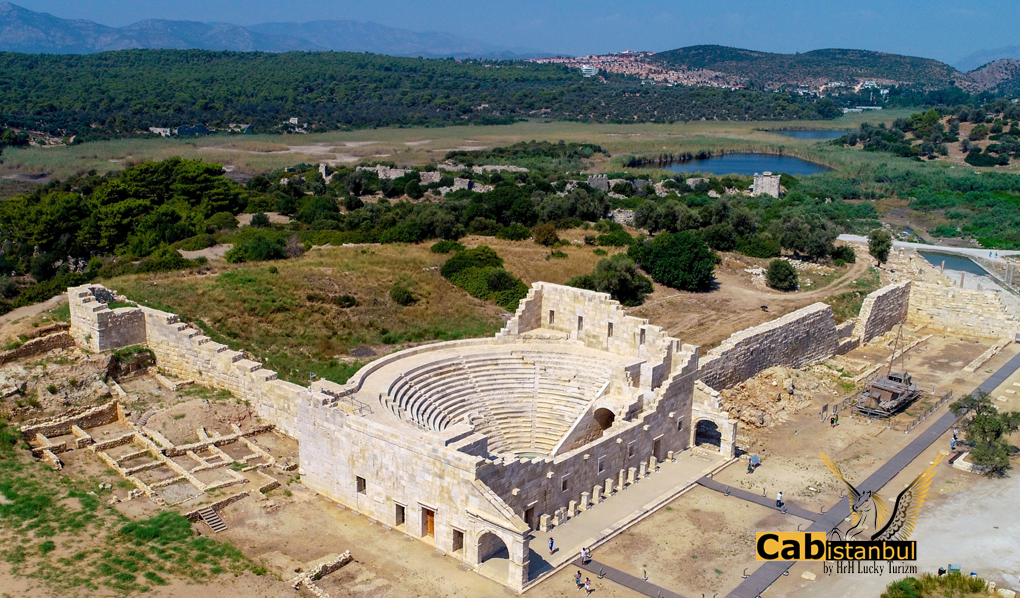