Prince Island (Buyukada), formerly known as Prinkopos Island and the largest of the Prince Islands, draws attention with its natural beauties, pine forests, extremely impressive and colorful redbuds scattered all over the island, historical mansions, and a quiet town location away from traffic chaos. Among the islands, Istanbul is the most preferred island by local and foreign tourists to go and see and spend a nice day. Below you can find information about places to visit in Prince Island popular places, activities, beaches, coasts, restaurants, historical places, and transportation

Would you like us to pick you up from your address and drop you on the Prince Island ferry? How would you like to go to the big island with a guide who knows your language and feel all the experiences? Wouldn't it be nice to go to the top of the hill where the carriages used to work and have a snack? Observe Istanbul from the Prince Island! Rent a car with a driver from Cab Istanbul to add color to your Istanbul trip. All that's left is how you want to have fun. Click for Istanbul transfer services

When you step into Prince Island, the first thing that will catch your attention is the use of electric vehicles instead of phaetons. After the removal of horse-drawn carriages, the interest in the islands increased. Prince Island has two hills, one in the north and one in the south. The name of the southern one is Yucetepe, the northern one is called Manastır Hill. There are two neighborhoods on the island, namely Nizam and Maden Neighborhoods. Even as you approach the island, you will encounter the view of the island houses. The island's ferry port is located in the main square, where you will see the Clock Tower, which has become the symbol of the island, restaurants, shops, and hotels lined up along the coastal road. Motor vehicles are not allowed on Prince Island, except for vehicles for public service (Ambulance).

Therefore, you can easily explore the island by bike or on foot. The island has public beaches as well as beaches that require membership to enter. These; Eskibağ Beach, Halik Bay Beach, Princess Bay Beach, Yorukali Beach, Nakibey Beach, Aya Nikola Beaches. You can enjoy the sea all day long by renting sun loungers and umbrellas on these beaches.

Prince Island, which is the center of the all Prince Islands districts of Istanbul and also the farthest from the land, was the exile place of the princes in the Byzantine period. It stands out with its two scenic hills, 164-meter-high Jesus Hill and 202-meter-high Yucetepe, as well as the valleys and beaches between the hills. 4.3 km. length and 1.3 km. With its width, it is possible to travel around the island on foot or by bicycle, and electric cars (a kind of shuttle). The history of Prince Island goes back to the 6th century. Byzantine Emperor II. A monastery was built on the island by Justin in 565. The monastery was expanded at the end of the 8th century. After that, the island becomes a place of exile. Princes and statesmen are exiled to the island for reasons such as throne fights and political disagreements. This is where the name of the Prince Islands comes from

Under the rule of the Ottoman Empire, it became a quiet and peaceful place. Until the Turks period of 1909. After Sultan II. Abdülhamit's dethronement, most of the officials in the palace are exiled to the islands again. In 1929, the famous Russian revolutionary Leon Trotsky was exiled here by Stalin. In 1933, he was assassinated in his home here. Visitors to the island preferred the famous phaetons for sightseeing, but with a very accurate decision, electric vehicles are now serving on the islands as of August 2020. 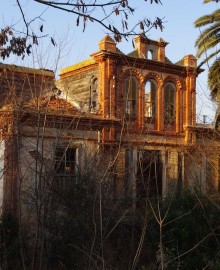 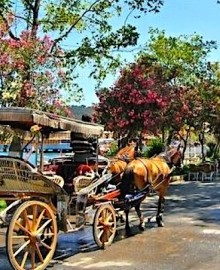 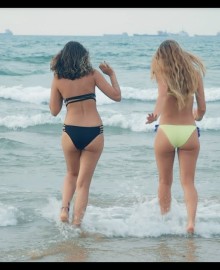 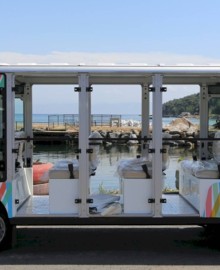 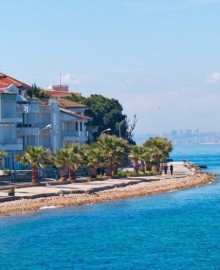 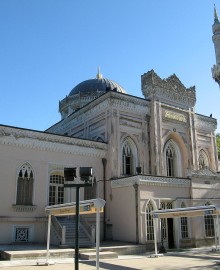 Nakibey Beach, located in Buyukada, only accepts couples and families, with this feature, providing fewer problems and plenty of satisfaction. Princes İsland's favorite Beach Nakibey continues to attract the appreciation of holidaymakers. The absence of moss, stones, and pebbles on the beach and the fact that the sea is completely sand allows children to have fun comfortably. The presence of ambulances and lifeguards on the beach is also an indication of the importance that the facility gives to its customers.

Nakibey Beach Entrance Fees are determined as -- TL for adults on weekdays, -- TL for weekends, and -- TL for children aged 7-12. Call for current rates

Prince Island welcomes its visitors in an extremely pleasant atmosphere with its historical pier, the big bazaar square, tea gardens, cafes, mussels, and famous fish restaurants. Among the places that are recommended to visit and see when you come to Prince Island, and the activities you should do

There are countless quality places where you can enjoy eating and drinking, especially on the beach and in the bazaar in Büyükada. The island is also famous for its seaside fish restaurants and ice cream shops in summer.

(Note: there are a lot of scammers who offer you awful restaurants, as a best, because they taking a commission from restaurants)İn our opinion the best places are, busy local restaurants